If Fall could be a food, it would Apple Cider Doughnuts! Cake doughnuts made with apple cider and dusted with cinnamon and sugar go perfectly with your morning coffee on a crisp autumn day. Learn how to make this seasonable Midwest treat!

Fall means something different to everyone. Back to school. Colorful leaves. Sweater weather. And in Michigan, when it's apple season, my favorite treat that comes with fall is Apple Cider Doughnuts.

It's common around these parts to go apple picking with your family. Nothing tastes better than an orchard-fresh apple picked straight from the tree. And don't forget the fresh apple cider juice!

I'll never miss an opportunity to buy a dozen (or two or three) of Apple Cider Doughnuts straight from the apple stands. But cake doughnuts are also easy to make at home. So whenever I have a craving, no matter what time of year, I can make a batch just for me!

How to Select Apple Cider

If you're lucky to live in a region with apple orchards, it's easy to find super fresh apple cider starting in August. Support your farmers by purchasing a locally made cider. I promise it is so worth it!

It's important to understand the difference between Apple Cider and Apple Juice. Apple juice has been pasteurized and heavily filtered. It's clear in appearance with a smooth one-noted sweet taste.

Apple cider, on the other hand, is not filtered. It's cloudy in appearance and more complex in flavor. It has a more prominent aroma compared to juice and a little thicker in texture.

For the best results in your doughnut recipe, seek out Apple Cider, which can be found nationwide at most supermarkets in the fall months. If you can't find apple cider, high-quality apple juice will still work!

To make cake doughnuts, you need a special doughnut pan like this one.

Alternatively, you can freeform them on a baking sheet. Or you can use a muffin pan and crumble up a piece of foil or parchment paper into a ball and place in the center. Then pipe the batter around the ball to create a circle.

Using an alternative might not make the prettiest doughnuts, but they will still taste delicious!

How to make Apple Cider Doughnuts

As with all doughnuts, they are best eaten warm and fresh! If you have leftovers, keep them in an airtight container at room temperature. They will stay fresh for about 3-5 days.

The best way to heat Apple Cider Doughnuts is with a toaster oven! But you can also give them a 5-10 second zap in the microwave. Or simply eat them at room temperature. 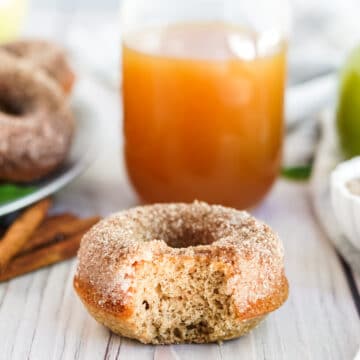 Pin It and Save It for Later!!Mention @FreshCoastEats or tag #freshcoasteats!
« Honey Roasted Parsnips
Peach Banana Smoothie »