This old-fashioned Cracker Barrel coca cola cake recipe is full of rich, chocolate flavor with a delicious chocolate fudge frosting. It is made from scratch with a can of cola in both the cake and frosting for a classic southern dessert recipe that results in a moist, dense double chocolate cake you can't stop craving.

Yes! If you have ever tried Cracker Barrel Coca Cola cake then you know how delicious it can be.

Old-fashioned coke cake originated in the 1950’s! It was originally published in the Charlestown Gazette but the recipe really took off in the 1990's when Cracker Barrel added it to their menu.

The original version contained mini marshmallows and shortening, but over time the recipe has been altered and simplified with modernized versions that are very similar to Texas Sheet Cake.

The best part is you don't need to visit Cracker Barrel to enjoy a piece! This copycat Cracker Barrel recipe is so easy to make at home and after trying a few different versions, I have developed what I consider THE BEST Coca Cola Cake Recipe ever.

If you love chocolate cake, you might also want to try this Chocolate Orange Bundt Cake. Make it ultra decadent with a little drizzle of homemade Dulce de Leche.

Aside from the can of cola, coke cake really just uses kitchen staples.

For the cake, you will need:

For the frosting you will need:

The recipe as written is a perfect version of southern chocolate cake with cola, but if you need to make substitutions you can change the following ingredients:

Everything you need to make this cake is likely already in your kitchen! Before you get started, these are the items you will need to gather.

The first step is preheating your oven and preparing a 9x13 inch baking pan by coating it with cooking spray.

You can also toss the prepared pan in a bit of flour or cocoa if desired for extra protection against sticking.

Another option, if you want to be able to lift the pan after baking is to line it with parchment or aluminum foil.

Assemble all your ingredients and combine the dry ingredients in a large mixing bowl. I like to use a whisk to combine everything.

The hardest part of this recipe is making the cola reduction, but even that step is pretty easy! Pour the entire can of cola into a small saucepan and simmer on medium until the cola has reduced to about a ½ cup.

This will take about 5-10 minutes. When you get close to ½ a cup, measure it out and discard the rest.

Reducing the cola will enhance and intensify the flavor and remove any water that will diffuse it.

Add the ½ cup reserved cola back to the saucepan along with the butter and heat to melt the butter. I like to use a whisk and move it around in the hot cola to speed things up.

Next, add in the cocoa powder and whisk until the mixture is smooth.

Set this mixture aside for about 5 minutes to cool, then add it into the dry ingredient mixture with the eggs, buttermilk, and vanilla.

You can whisk by hand but I like to use an electric mixer at medium-low speed to blend everything together.

Finally, pour it into the prepared baking dish and back for about 30 minutes. You can check the cake for doneness by inserting a toothpick or knife in the center. When it comes out clean, the cake is done!

While the cake is cooking, it's time to make the frosting. The frosting will be poured over the hot cake as soon as it is removed from the oven.

To make the classic southern cola cake fudge frosting, you are going to reduce another can of cola.

Just like the first time, measure out ½ of a cup and discard the rest.

Use the whisk again and add the butter and vanilla.

Then, add the confectioner's sugar to the mixture ½ cup at a time and whisk to incorporate until all 4 cups are added.

This fudge frosting should be poured over warm cake fresh from the oven. You may need to use a spatula to spread it across the entire cake.

I took half of the cake out, cut it into individual slices, and wrapped each slice individually in plastic wrap...similar to how you would wrap a brownie. The slices stored this way kept well for about 3 days and stayed nice and moist. However, the tops did get a little sloppy.

The second method we tested was just draping the entire cake pan with plastic wrap. The edges got a little bit dry, but ultimately this was our preferred storing method. The icing stayed intact and the cake tasted delicious!

This cake can be stored for up to 3 days at room temperature or in the refrigerator for up to five days.

Can I use diet coca cola for this recipe?

Yes! While traditional chocolate cake with cola is made with classic coca cola, you can use diet if that is your preference.

How can I make this Gluten-Free Coca Cola Cake?

Use a 1/1 gluten-free flour replacer in place of the all-purpose flour.

Do I have to use buttermilk?

No, you can use regular milk and the cake will taste just fine. Traditional southern coca cola cake uses buttermilk.

Can I use pre-made frosting?

Yes. Traditional southern chocolate cake with cola uses two cans of cola which are both reduced to half a cup. If that is too much for your liking, you can use pre-made fudge frosting instead.

What should I serve with Coca Cola cake?

Did you try this recipe?  Please leave a star rating in the recipe card right below! You can also write a review in the comment section further down the page I always appreciate your feedback. And don’t forget to tag me @freshcoasteats in your photos on social media, I'd love to see your results! 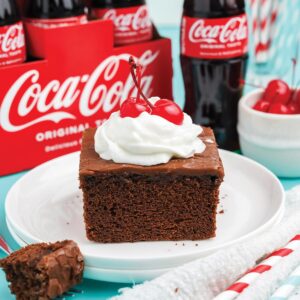