The ultimate brunch treat! This Belgian Waffles Recipe makes a batch of the fluffiest waffles with the perfect golden brown crispy exterior. Makes these your own by adding your favorite fresh fruit toppings!

When it comes to brunch, my weakness is Belgian Waffles! I can't resist a big fluffy waffle with deep pockets, enough to capture lots of extra butter and maple syrup. Just add a coffee and mimosa, and I'm in breakfast heaven!

But you don't have to go out to a fancy overpriced brunch to indulge in this sweet treat. That's why I developed the perfect Belgian Waffles Recipe to whip up a batch anytime I have a craving or want to create a lovely brunch party for friends and family.

What are Belgian Waffles?

Similar to a pancake batter, waffle batter is meant to have a significant lift when cooked. That's why you see waffles that are an inch thick. The batter is then poured into a waffle iron which gives it a distinct look.

You can't make waffles without a waffle iron! Most commonly, waffle irons are electric. But you can also find stovetop irons, which are made of cast iron, and you heat them on your burner.

I highly recommend using an electric iron. The settles prevent you from overheating and, therefore, risking burning waffles. This waffle iron from Cuisinart is a great option if you're a full-time waffle maker like me.

How to Make This Belgian Waffles Recipe

Making waffles for a crowd? You can make these waffles an hour before serving. Use your oven's "keep warm" setting or set at 200 degrees. Place cooked waffles on a baking sheet and keep warm in the oven until serving.

The first waffle is usually a dud! Don't let that discourage you! Just like making pancakes, the first one tends to be a bit overcooked when the waffle iron is hot. Use this opportunity to adjust the temperature settings, and the rest will come out perfectly.

This is a great recipe for batch cooking! Once you complete a full batch of waffles, allow them to cool at room temperature before adding to a freezer bag. Place sheets of wax or parchment paper between waffles to ensure they don't stick together.

Frozen waffles are good for up to 6 months. To reheat, pop them in a toaster or toaster oven for a few minutes until hot and crispy.

This post was originally seen on Tornadough Ali where I am a contributor. 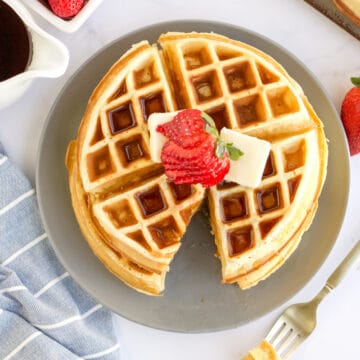 Keep waffles warm in the oven set at 200 degrees.

We are a participant in the Amazon Services LLC Associates Program. As an Amazon Associate I earn from qualifying purchases. All photography and written text on this site are Copyright of Fresh Coast Eats © 2019, unless otherwise noted. Material may not be duplicated, published or re-written without permission. All rights reserved. Please send all inquiries to [email protected] For all legalities, please see our Privacy and Disclosure for more details!