These adorable mummy tarts make the perfect Halloween dessert recipe that the whole family will love. Serve these up for your Halloween parties or simply a special treat for your kids to enjoy!

These mummy apple pie tarts are so easy to make that even the youngest kids can help out with making them. Plus you can change the recipe up to fit different tastes.

Need a tasty dessert to serve year around? These mummy desserts can be made outside of Halloween by simply leaving off the eyes.

As you see when you decide to make your mummy dessert tarts there are a few options available to you. Do you go with premade crust and premade pie filling? Do you make everything from scratch? I’ll dive into my thoughts on the argument and help you decide for yourself.

There is an eternal debate between premade and homemade, especially when it comes to baking. But, I want to settle this argument once and for all…at least for this Halloween dessert recipe for mummy tarts.

There's no shame in using pre-made pie crust. It will save you considerable time and effort that is better spent doing…just oh so many things. If you made all of the ingredients for this recipe it would take you nearly 4 hours from beginning to end! While using easy premade options the whole thing is done in less than half an hour. A huge difference!

So don’t let yourself feel guilty for taking the easy route, we’ve got better things to do than make pie crust.

Whichever route you choose, you will want to cut the pie crust dough the same way.

After cutting the dough, top each rectangle with apple pie filling and place the strips over top. Lay them in an angle and even overlap them so they look like strips of cloth on a mummy!!

And don't forget to leave a space for the eyes, which will be placed on after baking.

Before cooking them, use a fork to crimp the edges so the dough stays together while cooking.

Cooking in the Air Fryer

Once you finish making the mummy apple desserts, carefully move them into the basket of the air fryer. Make sure you leave a little space in between each tart so the air can properly circulate around each one. Depending on the size of your air fryer you may need to do a few batches.

Cook them at 350 degrees F for about 10 minutes or until the crust begins to turn golden brown.

While the mummy apple pie tarts are cooking, make the glaze.

Cooking in the Oven

Alternatively, you can cook them in the oven. Simply place them on a baking sheet and cook at 350 degrees F. They will take a little bit longer in the oven than in the air fryer.

Once the mummy apple pie tarts are done cooking, place the eyes into the apple pie filling and drizzle the glaze over the pie strips. I like to also sprinkle Dixie Crystals sugar on top for a little extra sparkle.

Other Flavors to Use for Halloween Dessert Pies

If apple pie isn’t your thing, that’s ok. There are a ton of different pie fillings that work just as well!

You can find pie filling already made that is blueberry, strawberry, raspberry, peach, blackberry, and even lemon.

I don’t recommend pumpkin or any other solid pie like that as the texture won’t be the same and cooking times may have some variation.

Again, just like with the pie crust you can make your own pie filling if you want especially if you have dietary concerns about premade pie filling. Using the premade is just so much easier and a way to save yourself at the very least 30 minutes by going with canned pie filling.

Getting the Kids Involved

This is a great Halloween dessert recipe to get the kids to help you prepare!! It’s so simple to do that kids of all ages will have a blast helping out.

If they’ve never taken an interest in cooking or baking before this might be just the thing to inspire them and spark an interest in learning an important life skill.

Depending on their age they can help out by making the glaze or, if they're in school then they are old enough that they could make this entire recipe on their own.

Though I do still recommend some adult supervision, especially when the air fryer comes into play.

Use premade pie crust and apple pie filling to save some time!

Get the kids involved in making mini mummy apple pie tarts! They will have a blast!

Cut the strips to make the mummy gauze into uneven strips for a more authentic mummy look!

Add the strips onto the mummy apple pie tarts at angles to look like they are wrapped around the mummy. Don't forget to leave room for the eyes.

Sprinkle a little sugar over the top of the finished mummy apple pie tarts for some extra sparkle.

Can I make these air fryer apple tarts in the oven?

Yes. Use the same temperature, 350 degrees F and cook for 10-15 minutes. They take a little longer when cooked in the oven so check them when the time is done and cook longer if needed for the dough to cook and turn golden brown.

Do I need to store these in the fridge?

If you are lucky enough to have leftovers, you can store them at room temperature for a day. If your planning to enjoy them any later than that, I would put them in the fridge. With that said, these are best enjoyed warm and fresh from the air fryer!

How do I reheat these?

Turn your air fryer on warm or a low setting, removed the eyes and warm for a couple of minutes. It wont take long until they get nice and toasty with a freshly made flavor once again!

If you’re looking for some other Halloween treats to try out these amazing recipes I have lined up for you, including a treat that is just for the grownups.

Did you try this recipe?  Please leave a star rating in the recipe card right below! You can also write a review in the comment section further down the page I always appreciate your feedback. And don’t forget to tag me @freshcoasteats in your photos on social media, I'd love to see your results! 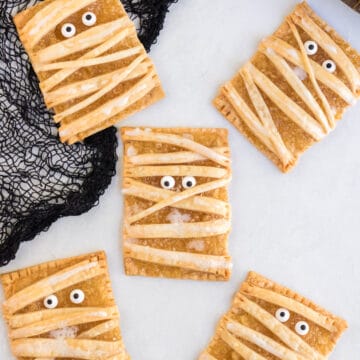