Kartoffelsuppe (German Potato Soup): A traditional and authentic version of one of Germany's most popular weeknight meals. It's healthy, easy, delicious and ready in 30 minutes.

In the culinary world, Germany is known for their unique sausages, incomparable potato dishes and savory well-seasoned stews. Combine these three German staples and you have one of the best tasting soups ever. I can't wait to introduce you to Kartoffelsuppe, or German Potato Soup!

Kartoffelsuppe is the German version of potato soup! It's loaded with healthy veggies and packed with flavor. Traditional Kartoffelsuppe contains:

One of my favorite things about cooking at home is that you are in complete control of what goes into the food you are making. It has many nutrient dense veggies and can be very nourishing for your body, it is also clean eating approved. To make this soup a little more healthy, you could omit the oil, salt and even skip the sausage if you need to.

What kind of Sausages should I use?

I prefer Vienna Sausages without the casing. But you can choose Vienna Sausages with the casing or even your favorite Bratwurst will be great. The sausages are used for garnish. I have experiment with adding them to the soup towards the end of cooking and found it to be a little overpowering. A few slices on the top as a garnish really allowed the vegetables and spices to shine and added a welcomed variety of texture and flavor, rather than an overwhelming sausage flavor.

Whatever type of sausage you choose, be sure to slice them on a diagonal for an elegant presentation.

While doing my research for creating this recipe, I saw many versions floating around that contain bacon, or "speck" (a thicker cut of bacon). I reached out to a friend who relocated to Germany and she confirmed that authentic German style does not contain bacon - just the thin, pretty slices of sausage on top.

The versions that contain speck, or bacon, are Hungarian style. They are equally delicious but definitely have more a strong, meat flavor.

If you want to make this recipe Hungarian style, simply add in about a cup of cooked speck before you simmer the soup.

How to Make German Potato Soup

Start by gathering your ingredients. For this recipe we are going to use:

Start by heating oil in a large dutch oven. Next, you are going to sautee the potatoes, onion, carrots, celery and leeks. Cook them over medium heat for about five minutes, stirring often. Add the garlic and cook one additional minute.

During this phase, we are just wanting to kind of get the veggies going. They will finish cooking in the dutch oven. So don't worry about cooking the potatoes all the way through.

Pour in the vegetable broth. Cover and simmer the soup on low for 30 minutes. The next thing I like to do is sautee the sausages and get them a nice golden brown color.

Stir in the salt, pepper, mustard and caraway when the soup is done. Finally, stir in the parsley and distribute evenly into bowls. The finishing touch is garnishing each bowl with the sausages.

Using the same ingredient quantities on the recipe card, saute the veggies in your instant pot for about 5 minutes. Add the broth and lock the lid into place. Turn the valve to the sealing position and manual cook on high pressure for 8 minutes. Quick release the steam when done.

You can make German Potato Soup in the crock pot by cooking on low for 6 to 8 hours. I personally prefer to saute the veggies on the stove ahead of time, I feel like bringing the onions to a sweat before putting them in a crock pot really helps deepen the flavor.

I love serving this soup with a salad and some fresh bakery bread and a nice fresh garden salad. This soup is hearty enough to just serve with a light salad, but light enough where I am always craving bread with it!

If you want to stick with an authentic German meal, you could serve this soup with some German Bauernbrot. Bauernbrot is a perfect paring for this soup because its made with rye flour.

You could also try this with Zwetschgenkuchen (German plum cake) or Dampfnudela (steamed dumplings).

Don't be afraid to make a big batch of this soup because it keeps very well in the fridge. To store this soup, put leftovers in airtight containers and store for up to five days. This is one of those soups that is excellent straight off the stove, but it seems to get even better as it sits!

Technically, yes, you can freeze this soup. I have done it. But, potatoes tend to have an odd texture when defrosted and I really prefer this soup fresh or reheated from the fridge. I am a huge fan of freezing soups, but this one is better fresh. 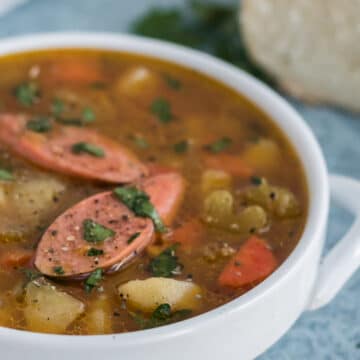 Please let me know what you think of this recipe! Share your creation on instagram with #freshcoasteats so I can see how yours turned out!

We are a participant in the Amazon Services LLC Associates Program. As an Amazon Associate I earn from qualifying purchases. All photography and written text on this site are Copyright of Fresh Coast Eats © 2019, unless otherwise noted. Material may not be duplicated, published or re-written without permission. All rights reserved. Please send all inquiries to [email protected] For all legalities, please see our Privacy and Disclosure for more details!